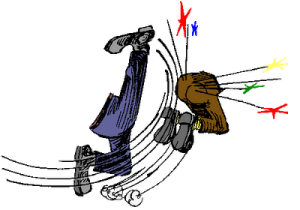 Tilly Bailey Irvine (TBI) the Law Firm that jumped on the “Speculative Invoicing” bandwagon driven by ACS:LAW has “Agreed” to accept a monetary punishment of £2800. This is a sad sad day for those who followed this case and were expecting more from the Solicitors Regulation Authority.

TBI launched their letter campaign in January 2010 and by April had had enough. They represented “Media & More GMBH” and also “Golden Eye International” sending out letters of claim to members of the general public that they claim were infringing the copyright of their clients.

Problem for TBI was that it was a deeply flawed system that rounded up far to many innocent people.

TBI like ACS:LAW and the law firm that followed Gallant Macmillan, never sought to go to court but relied heavily on the embarrassment of receiving one of these letters, and the assumption that no one would challenge them because of the damage to their reputation in doing so.

One of the more infamous titles represented by TBI was “Army Fu**ers”,  I cant publish the titles of the others as they are that bad (You can type in Media & More into a search engine to see what I mean)

Ironically TBI withdrew from the “Speculative Invoicing” plan, in a letter to the SRA TBI stated:

“We have been surprised and disappointed at the amount of adverse publicity that our firm has attracted in relation to this work and the extra time and resources that have been required to deal solely with this issue.

We are concerned that the adverse publicity could affect other areas of our practice and therefore following discussions with our clients, we have reluctantly agreed that we will cease sending out further letters of claim.”

TBI went on to try to eradicate all trace of their “Speculative Invoicing” actions by Vandalising” an entry on Wikipedia. This led to a rather amusing clash with one of the editors:

“Please do not remove sourced content from Wikipedia, as you did with TBI Solicitors — this is vandalism,” wrote a Wikipedia admin to Tilly Bailey & Irvine.

“Furthermore, your IP address geolocates to ‘TILLY BAILEY & IRVINE’ which suggests that you have a conflict of interest in removing criticism of the firm from Wikipedia. I suggest that you familiarise yourself with that policy before editing this particular article any further,”

They were slammed in the House of Lords and now have an entry in Hansard, describing them as “an embarrassment to the creative industry”  see 1:06 – 1:40

The Speculative Invoicing plan that TBI took wholesale from ACS:LAW as shown in the ACS leaked emails (And for which ACS:LAWs Andrew Crossley originally threatened to report them to the SRA, but later relaxed and attempted to “Work together” when the SRA came down on them both), was also described in the House Of Lords as “no better than Legal blackmail”

I attempted a satirical post regarding this comment, and TBI saw fit to threaten my Blog Host and also imply they would sue me for defamation.

In the end most people who read my Blog know that I seek only one thing from these Lawyers, and that is an apology, an apology for the pain they have caused in falsely accusing people who were left with a feeling of helplessness, and having no option but to pay up to avoid losing their homes or their jobs.

Did Tilly Bailey Irvine feel they could apologise? Well here is what one of their Bosses said,

TBI managing partner John Hall said the firm was “delighted to be able to dispose of this matter in a way that makes it clear that the firm has never acted with any conscious or deliberate impropriety”.

He added: “We take pride in our reputation for fighting our clients’ corner to the best of our ability. Although on this occasion the SRA has ruled that we went too far – on their interpretation of the rules – we shall continue always to put the interests of clients first, as our clients and the public generally would expect.

“Copyright breaches cost business £200m per year. We hope that these cases will highlight the lack of clarity in the rules and ensure that, in future, criminal activities such as these can be dealt with by the legal process so that copyright is safeguarded and clients’ legitimate interests are protected.”

noting that the SRA ruled that the company went “too far”, that decision was based on “their (SRAs) interpretation of the rules”.

One wonders what on earth John Hall means by this, the SRA after all are the ones who MAKE THE RULES and regulate Solicitors, this is no apology, and I hope the SRA will reconsider referring Tilly Bailey Irvine to the Solicitors Disciplinary Tribunal which is independent, and where the likes of John Hall can argue the rules all he wants.

I am one of the many innocent people who have been accused of file sharing by Copyright Trolls, my letter came from the now infamous ACS:LAW, but they have now been emulated by many more using the same system. Their ruse is simple, Send out letters of claim with NO Real evidence beyond an IP address that they claim was captured using a frowned upon hack of Shareaza. My REAL opinion of these companies turned when they started sending out Pornography claims, THAT is what I find most disturbing. People who HAVE to pay up without the option of having their day in Court. THAT is NOT Justice. Why can't they just go to Court? because the Lawyers, pitch the price of paying the "Compensation" at about the same rate as hiring a lawyer to fight it. Things have changed in the last 8 years though. I would advise people to read the "Speculative Invoicing Handbook Part 2", research these people yourselves, and find me at Slyck Forums, or on Twitter. Do NOT Worry, Stand Strong
View all posts by Hickster →
This entry was posted in Uncategorized and tagged acs law, amanda mitten, copyright trolls, davenport lyons, digiprotect, john hall, logistep, lord lucas, martin levinson, tbi, tilly bailey irvine. Bookmark the permalink.